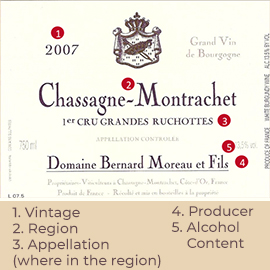 Besides often being well designed and eye-catching, wine labels usually indicate either the location where the wine is produced or the grape variety (aka varietal). While European wines are primarily named after their geographical origin, non-European wines almost always have the name of the varietal. For example, Bordeaux wine, which is produced in the Bordeaux region of France, is actually made from Cabernet Sauvignon, Merlot, Cabernet Franc, Petit Verdot, and even Carmenere and Malbec. Non-European wines almost always have the the varietal on the label, such as Cabernet Sauvignon from California.